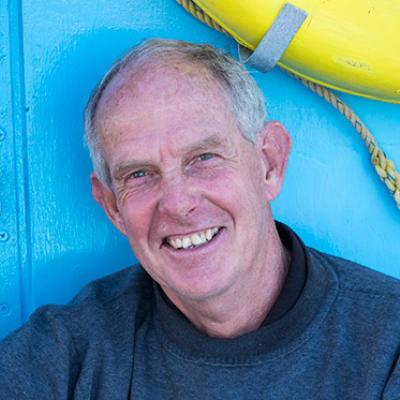 Meet Derek Oldham
Derek Oldham has been a Two Rocks local since 1975 and after travelling to more than 135 countries says he wouldn’t want to live anywhere else in Australia. He refers to Two Rocks as his ‘oasis by the sea’.

The quietly spoken man is well known around Two Rocks and knows just about everybody.  Derek and his twin brother began working in Two Rocks when Alan Bond needed a maintenance team back in the heady days of the 1980s.

“It was a hectic and exciting time, Alan Bond had a vision to create a city here and the Atlantis Marine Park was built by Japanese investors Tokyu,” Derek said.

“The shopping centre at that time was well known for local artisans; candle makers, wrought iron craftsmen and potters.  This made it a much more interesting place than just a shopping centre. “When I first came here, it used to take two hours to drive to Two Rocks from Perth and most houses were built on sand dunes, there were no trees.  Alan Bond’s team seeded a lot of the vegetation in the area by plane.”

Derek said he loved the lifestyle so much that despite the closure of the marine park in 1990 he’s chosen to stay.  He’s travelled to more than 135 countries and worked as an electrician, maintenance manager, historian and a teacher in several nations including Afghanistan.

“I always say that if I leave Two Rocks I leave Australia. My parents lived here and I still have a sister in the area.  This place is like an oasis with good proximity to the city and plenty to do.”Derek believes there is good scope for responsible development in Two Rocks.“

It would be good to have some of the beaches developed properly with adequate walkways and for the shopping centre to be busier.  I’d like to see development on larger housing blocks rather than high density housing. “The other thing we need is jobs for local people, especially young families and services such as medical care close by for residents.

“Sensible development that retains the appeal of Two Rocks would be good for people in the area.”